While fishing had its rise and fall, agronomy was limited to small areas of fertile land, and saltworks disappeared soon after they were first mentioned, sheep herding had the continuity of being the primary economic activity on the Kornati from the distant past to the beginning of the 20th century. The owners of the Kornati – whether it was the Zadar Commune till 1409, Venetian Republic till 1639 or the Zadar nobility till the latter half of the 19th century – rented out the Kornati pastures for an annual fee or a payment in kind. "Northwest Kornati" and "Southeast Kornati" were rented separately from the early 16th century and the boundary was at Komornjak hill.

What settlements the shepherds were recruited from? Stanoj the shepherd from the 14th century was from Pašman. In the 15th and 16th centuries shepherds came from the Long Island settlements of Sali, Luka, and Žman. In the latter half of the 16th century and the first half of the 17th century, at the time of the greatest prosperity of fishing that attracted the people from Sali, only those from Žman remained as shepherds on the Kornati. After them came the people from Murter and Betina. The first known person from Murter who rented the Kornati pastures in 1654 was the Murter parson, don Ive Skračić.

It happened during the Cretan War (1645-1669), when many islanders mobilized to defend their villages and even whole areas from Turkish incursions, and when the corsairs of Ulcinj operated throughout the Dalmatian waters. In this situation, but also because of still insufficiently known disputes among the owners, the Kornati were left without shepherds. It's still open as to why the Murterini, the inhabitants of a comparatively distant Murter island, became the new shepherds. Some of the reasons were certainly the overpopulation as well as the lack of pastures and the arable land on their island. Nevertheless, the Murterini took a tenacious hold and grew deep roots in the soil of the Kornati. Moreover, even the recent ownership structure – complicated and motley as it is – mostly comes from the ancestors who were the first tenants, through the centuries-long process of inheritance and transfer of the peasants' and shepherds', and finally the ownership rights. 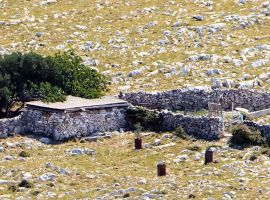 The so called stanovi (singular: stan) were built further from the shore on the Kornati and people lived there till they moved to the shores. A sheep pen and a watering place were beside a stan. As the residents of the Kornati gradually moved to the shores, the stanovi became stores for farming tools and people lived there only when milking the animals. As the pastures were divided between heirs, the number of sheep pens grew and they lost their original purpose so every sheep pen was called a stan. The sheep pen for one owner was built on the pasture closest to the port – usually in the right angle made by the boundary dry stone walls, if such a place was available. The stan itself was built in the dry stone wall technique and covered with branches, and later with tiles. Some of the stanovi were turned into sheep pens.
Most of the stanovi are in the area of Knježak, Trtuša, Željkovci and Šipnate. They received their names so the owner's name was put in front of the word stan. Thus we have Bebanov stan (Beban's stan), Jeratov stan (Jerat's stan), Lovrićev stan (Lovrić's stan) and so on.

In order for the Kornati pastures to grow good grass for the sheep and goats, the owners organized burning of the pastures. They did it every few years. We know that the burning of pastures was organized because the holm oak community are preserved (for instance, on Piškera and Lavsa). Holm oak was important to the people on the Kornati for several reasons. It meant heating, shipbuilding, and wood for various tools. The changes occurred at the beginning of the 20th century when gas lamps appeared and the wood was not needed for fishing as well as in the Sixties when households started using natural gas and the tree felling on the islands declined. As the agriculture and population gradually declined, the landscape started changing. Less trees were planted and the pastures became poorer (they couldn't feed the flocks anymore), and the appearance of the Aleppo Pine endangers the authentic look of the landscape. 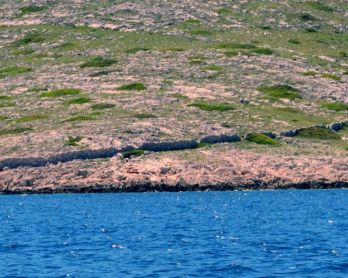 Small islands were used to pasture the sheep that were not milked, like lambs. In order to herd them together more easily on such a small island, the so-called sakaturs were erected. A sakatur is a wall built from the sea towards the interior under a certain angle and the sheep were herded towards them. Such sakaturs still exist on Levrnaka and Lunga.