As predators, owls are on the top of the food chain and are susceptible to changes in the habitat so they have a special significance as indicators of the stability of land (island) eco-systems.

That's particularly true for Eagle Owl, a big bird and an appropriate "night watch" for eagles' "day watch".
Eagle Owl (Bubo bubo) is a rare and endangered species in most of Europe nowadays. In Croatia, both the biology and the ecology of Eagle Owl are poorly researched. However, even the scant information available shows that their numbers dropped significantly and that their habitat was sharply reduced. A hundred years ago, this bird nested all over Croatia, both on the islands and on the coast as well as in the interior. Today, Eagle Owl is most probably extinct in Central and Eastern Croatia, while it holds on in a relative abundance only in the coastal areas.

Eagle Owl is a very attractive bird. It's the largest European owl, about 70 cm in length, with the wingspan of 160-190 cm. It has distinctive orange eyes and feather tufts on its head that gave the owl its Croatian name – ušara, the big-eared one. Eagle Owl (as all the other owls) has an interesting adaptation: its flight is silent. The flight and tail feathers don't have sharp edges as in other birds but are fringed. In that way its flight is made inaudible so the bird approaches its prey undetected and kills it with its huge and powerful talons. As to their sight and hearing, eagle owls are without peer. Both senses are extremely well developed and it uses both for survival, depending on the situation.
Eagle Owl lives in open areas and karst pastures (the most common habitat on the islands) are ideal hunting grounds for this species. It usually nests on rock ledges, caves, holes, bigger cracks or even on the ground itself (for instance, under a holm oak). It lays eggs (2-4) on the bare ground, that is, it doesn't build the classic nest. Chicks hatch after a bit more than 30 days, covered in thick downy feathers. While they are growing up, there are many bones, wings and feathers (mostly young seagulls) around the nest but the most numerous are pellets.
What are the pellets?
The pellets, or castings, are indigestible parts of prey that owl regurgitates. In other words, it's a mixture of bones, feathers or hair nicely rolled up in clumps.
At the age of six months, the chicks become independent and start looking for their place under the sun.
The species is on the list of endangered breeding birds of Europe because it became rare, while in Croatia it's comparatively numerous on the coast and islands so it was put in the "vulnerable" category – it's not about to go extinct, but may be soon.
It is estimated that there are 5-7 breeding pairs in Kornati National Park. 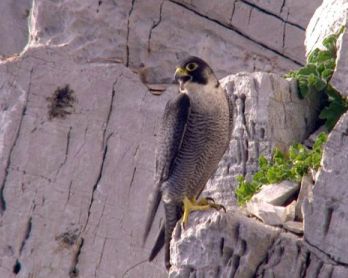 Here's an interesting inhabitant of the Kornati National Park. To understand why this species is so valuable for this area, we have to know some basic facts. According to the Red Book of Endangered Birds of Croatia, this species belongs to the category of vulnerable breeding population. That generally means the species faces a high risk of extinction, and that's why it's protected through the Nature Conservation Act. It's also protected through the Bonn Convention (conservation of migratory species of wild animals), through the Washington Convention (convention on international trade in endangered species of wild fauna and flora). Peregrine is also the main "culprit" why Kornati were listed in the National Ecological Network as an important area for the birds of Croatia. An estimate of the breeding population in Croatia says that there are between 160 and 200 pairs here. 90% of the number lives in the coastal area and its hinterland, and only 10% in the mountains and plains. It's a cosmopolitan bird (can be found all over the world), but as we said, it breeds in our coastal and mountainous areas, and sometimes in the plains, too. The population is the most numerous in the Mediterranean part of Croatia. Peregrines live in different habitats, from open to wooded areas, in the interior and by the sea. It's quite an adaptable species. It needs open areas for hunt while for nesting they need cliffs, rocks or other steep, inaccessible locations which Kornati certainly don't lack. Peregrines are not exactly gregarious. Their nests are solitary. They are monogamous and probably mate for life. The nest holds 3-4 eggs, the incubation lasts for 29-32 days, both parents sit on eggs and raise chicks, and the young are independent after two or more months. They eat birds almost exclusively. They hunt birds from the size of a sparrow to a grey heron or a goose, rarely mammals, amphibians, lizards and insects. Their usual way of hunt is to rise above the prey and then briskly dive at it, at the speed of more than 300 kilometres per hour. Yes, you read it right – more than 300 kilometres per hour.
Imagine such an impact and then surviving it!