From Neolithic to Byzantium

The first traces of human presence on the Kornati islands date back to the Neolithic. The evidence is the stone axe found near the field Trtuša, under the hill of Stranžica on the island of Kornat. Today, the stone axe is in the Archaeological Museum in Zadar.

ILLYRIAN ERA
The first confirmed colonization of the Kornati dates to the Illyrians. Small square dwellings, individual or grouped (as they are below Pedinka, above Željkovci, or Pod selo near Trtuša and Grba on Žut Island), gradine (Ščikat, Stražišće, Tureta, Grba) and heaps (barrows, on almost all rises on Kornat and Žut) are the evidence for a significant inhabitancy of the Islands during the prehistoric era. They were mainly herders but fishing also had an important role in their economy.

ROME
Ancient Romans also found this area interesting for living and exploitation. The Roman building of Villaerusticae in Proversa and fish pool on Svršata, it is believed, cut through the previously undivided Illyrian space on the Kornati and Long Island. Some authors think that it was the critical event for the continuity and intensity of the Illyrian inhabitancy of the area. Other traces of buildings from Classical antiquity that give evidence of Roman colonization of the Kornati are mainly under the sea now: the wharves of Piškera and Šipnate, harbour devices of Vela Proversa, the saltworks in Šipnate.

Church of Our Lady of Tarac (Gospa od Tarca), a humble one-nave sacral building (a typical rural late Romanesque church), built in the place of the early Christian basilica, most probably with the stones of the older church. 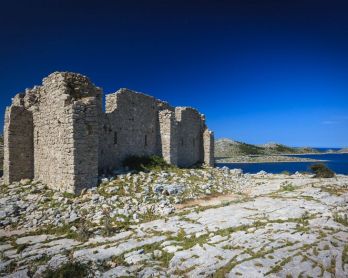 The time of Byzantium left, according to many, the most remarkable building found on the Kornati: the fort of Tureta on the island of Kornat (Late Antiquity to Early Middle Ages – possibly from the 6th century). It is assumed that the fort had military purpose, to secure and control the shipping on then quite unsafe Adriatic.
Another interesting edifice from the Byzantine era is an early Christian three-nave basilica at the bottom of Tureta fort, St. Mary's – a bigger part of the apse and a part of foundations are still visible today. Considering the size of the church (30x13m), it is hypothesized that the Kornati had a sizable population at the time. In the immediate vicinity of the church (inside what is today a sheep pen), there are the remains of foundations for a building suspected to be either a Templar monastery or a Benedictine monastery. It is interesting to note that throughout the Middle Ages the island of Kornat was called Insulae Sanctae Mariae,Stomorin island and similar names, after the church. 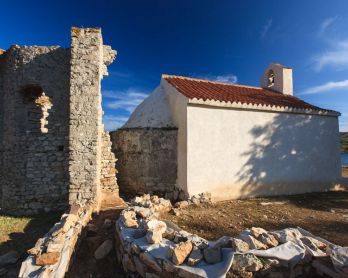